Maternity Clothes? Got my maternity jeans last week, they are a little big on me but they have room to grow. Most importantly, They're long enough!

Stretch Marks? No but the itching has begun! I had been using cocoa butter balm but have started using the oil... the sticky greasy mess grosses me out, at least with the oil it will spread more nicely.

Sleep? Last night was filled with crazy dreams. In one of them Auntie Agnes carried around 40 different purses and they all did different things - one turned into a filing cabinet! LOL. Where does my subconscious come up with this stuff? And if she really has one of those she better show me how to use it because I want one that stores all that goodness in a compact hand bag!

Best Moment this Week: Jeremy and I went through our 'storage' items that had taken ownership of the baby's room. It only took an hour or two, but the two bookshelves I had originally purchased for use in his storage shed finally got placed there (without argument - every other time he said WHY DO WE NEED THESE!?) So now we only have 2 pieces of furniture that need to go to good will (both living in his office now) and all of the baby stuff we have received thus far is currently residing in the babies room! The cradle is still in the living room, as that is where it will live most of the time ;) but everything else is now in the babies room. After we have the babies furniture in I will figure out how to store that stuff.
{We have certainly been blessed! We have swings, stationary play sets, baby carriers, car seats and more!}

Miss Anything? Sushi. Really fish of any kind. I have been eating a lot more shrimp these days because its the only thing seaworthy that I can eat AND stomach. I would really love to get to that stage of my 2nd trimester where I can eat normally again... (not that sushi or fish would be on that... maybe salmon)

Movement: OMIWORD. This weeks appointment with Dr. Medrano was terrible. Someone had told me to drink Orange juice before the appointment so that the baby would be on a sugar high and move about a lot so we could see what flavor our baby is... so I did! And Dang! This baby can move. It was only comfortable for me to STAND while in the waiting room.

Food Cravings: Asian Noodles. When I am at home I crave Ramen noodles with steamed vegetables. :)

What Makes you Queasy: Chicken. The list has dwindled down to that.

Gender: No idea! That we were supposed to find out at the appointment - BUT the other doctor was out on vacation, leaving my doctor to tend to her patients which put him 1 hour behind schedule! The nurse staff that night was HERS too, and they SUCK. {My doctors staff would have told me right away that he was running late and that I should use the restroom or go get my water and a snack... something.} But these women said/did NOTHING. And by the time we were seen my child had crashed from its sugar high and was in hibernation mode bottom down. He tried REALLY hard, but he said the baby was sleeping. {Hence the ultrasound that also shows very little! We did get to see your face for a split second, :) } We even tried to hear the heartbeat (for the first time) but all we could hear was the placenta because of where the baby was sleeping... I was SO grumpy! 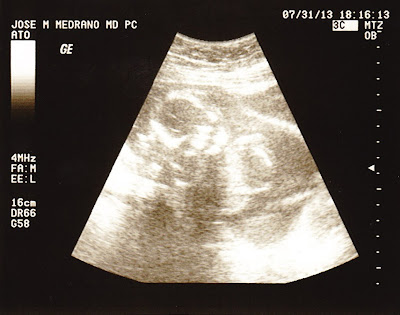 This Wednesday is my diagnostic appointment though, so hopefully the baby will be moving about since its in the morning, not at dinner time. Jeremy really wants to know, as does all of our family and friends - I'm happy either way. :) Prayers welcome!

Symptoms: Still have the morning sickness. Still have the exhaustion. New to the group is lower back pain and extreme dizziness. (Fun! Not.) I feel like I am still on the Scrambler at Six Flags in my mother's tummy. (Grrr. I blame you mother.)

Mood: I am at deadline this weekend and yesterday we got through A LOT of goodness. So I am feeling productive today. It will be nice to put this 96 page book to bed! :) The biggest we have had in quite a while!

What's the Daddy-to-be Doing? He was very upset that you were sleeping when we were seen by the Doctor. He REALLY wants to know whether you are a Violette or a Maddox so that he can start talking to you and not feel stupid by calling you "Baby". I told him my Daddy called me "Baby" all my life, (with a few other fun nicknames of course - like Max & Zinger) and I can still hear his voice when I read the words. Alas, hopefully he will have his answer on Wednesday and he can come up with his own nicknames. :)

Notes to the Little One: You were doing some crazy back flips at the doctors last week - Dad told me to tell you that you are off Orange Juice for the rest of the pregnancy. He said I turned colors and looked sick! I felt you kicking my ribs one minute, the next it was closer to my hips. You just didn't stop moving! Until we were ready to take your picture that is. Silly baby! I really hope you are awake for our next appointment.

This deadline was a doozie. Its obvious that you prefer me to move around these days... sitting for hours at a time wasn't working - so I kept getting up and walking around every few hours. We watched that "In The Womb" movie the last two nights, and it says that when you get to 24 weeks you will sleep 90% of the time... and be REALLY ACTIVE the other 10%. ONLY 5 WEEKS TO GO! :) I just hope the other 10% is when Mama is awake! Though I don't know how reliable this information is, it also said that by now I shouldn't be feeling morning sickness anymore - and that's just a flat out lie! It was a really interesting film though, we got to see a growing baby girl from the beginning of conception to birth and see & learn about all that happens each week of the journey.

Right now it said that you were getting your senses - and that hearing was the strongest of them right now. It said you can hear our voices (in the lower registers) so it's a good thing we have been talking to you, hopefully you will recognize both mine and your dad's voices when you are first born.

Posted by Little One Sawyer at 8:01 AM