Violette's 9th month has been a doozie so far! :) She is 40 weeks old, been out LONGER than she was in! So much has changed this month... and as I write this intro she has just finished a plate of pasta and shredded cheese! (a small plate, but alas... deconstructed MAC & CHEESE!) We are very excited about what is to come! Here's a look at what's been happening at Chateau Sawyer!

EATING
This week our little one can count 2 bottom teeth! She has been allowed some more adventurous eats as well! She started cheese and yogurt this week (both immense hits!) And pasta is another newfound favorite... with a preference toward the spinach or carrot varieties... we are now at 3 meals a day, and approximately 3 snacks. She enjoys puffs in spinach, sweet potato and carrot varieties these days as well. Such a big girl! (No teeth pics yet, she won't let us get near them yet - we think! - because they are so sensitive)


Crawling at 90 miles a minute these days, she still prefers standing and when seated is more in a kneeling position as though she will stand up at any moment. She is frequently found with "no hands!" Or an item in each hand standing up tall and strong. Such an overacheiver this one!

TALKING
Lots of babbling and smiling and just a few words. She understands quite a few though... like when I ask for her spoon or her ball or her block she knows exactly what I am requesting and hurries over to get it. She mainly says "mama", "dada" and "dog" .


SLEEPING
The last few weeks have been an improvement, with a 7 hour spurt and then a 2 hour spurt at night... there are still the every 4 hour nights but they have been less. We shall see if it continues.

THE REST
We had a fun photo shoot with Mel Carll last week. We got some really cute shots, too. Violette enjoyed her first touch of grass and dirt that day... yikes! This month was filled with blessings and changes, and we are excited to see what is to come!

Posted by Little One Sawyer at 7:05 PM

Sorry this post is almost 2 weeks late! Month 8 was a wild ride, filled with adventure, big changes and lots of snuggles! Here is an update on what's been happening here at Chatéau Sawyer! 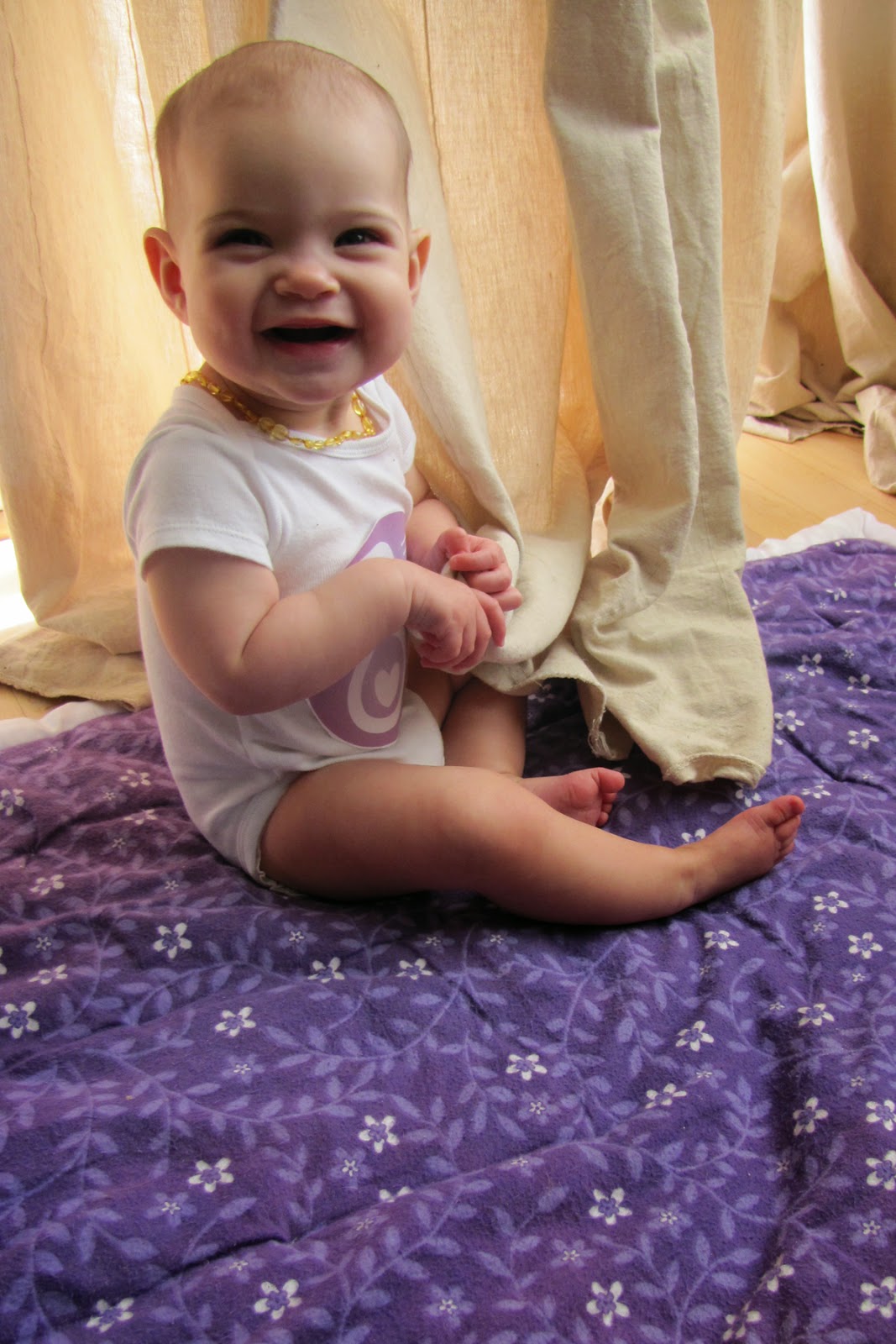 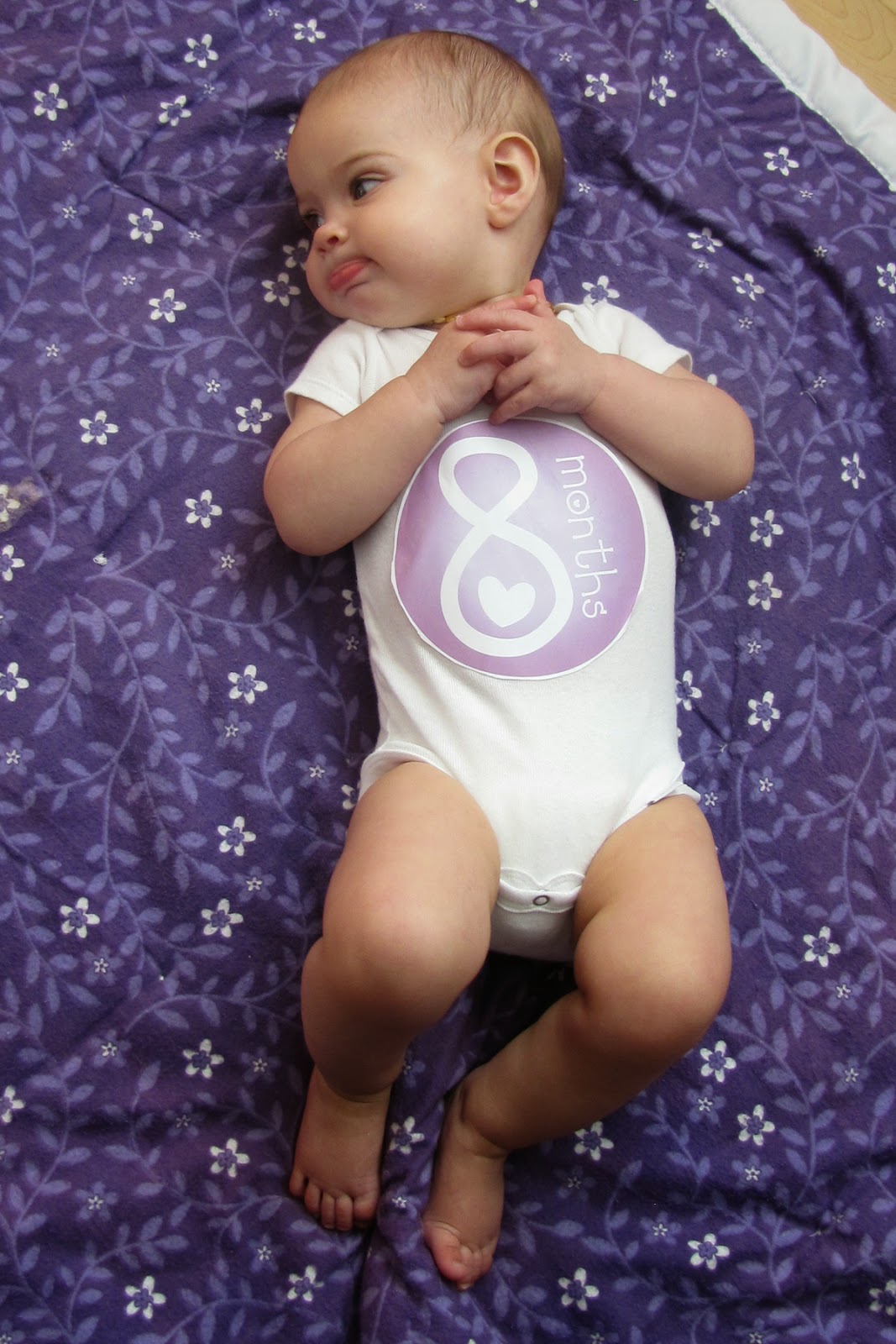 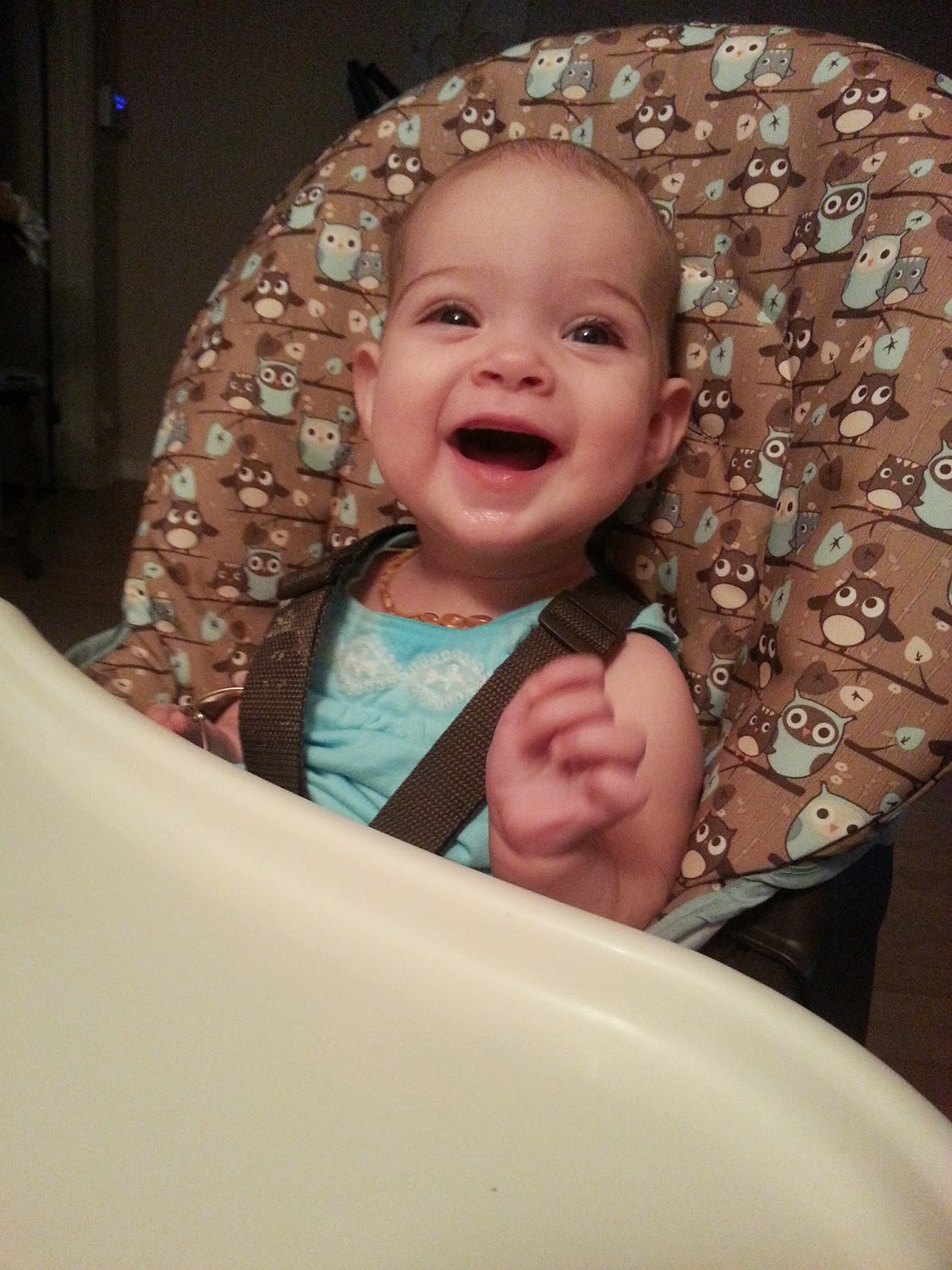 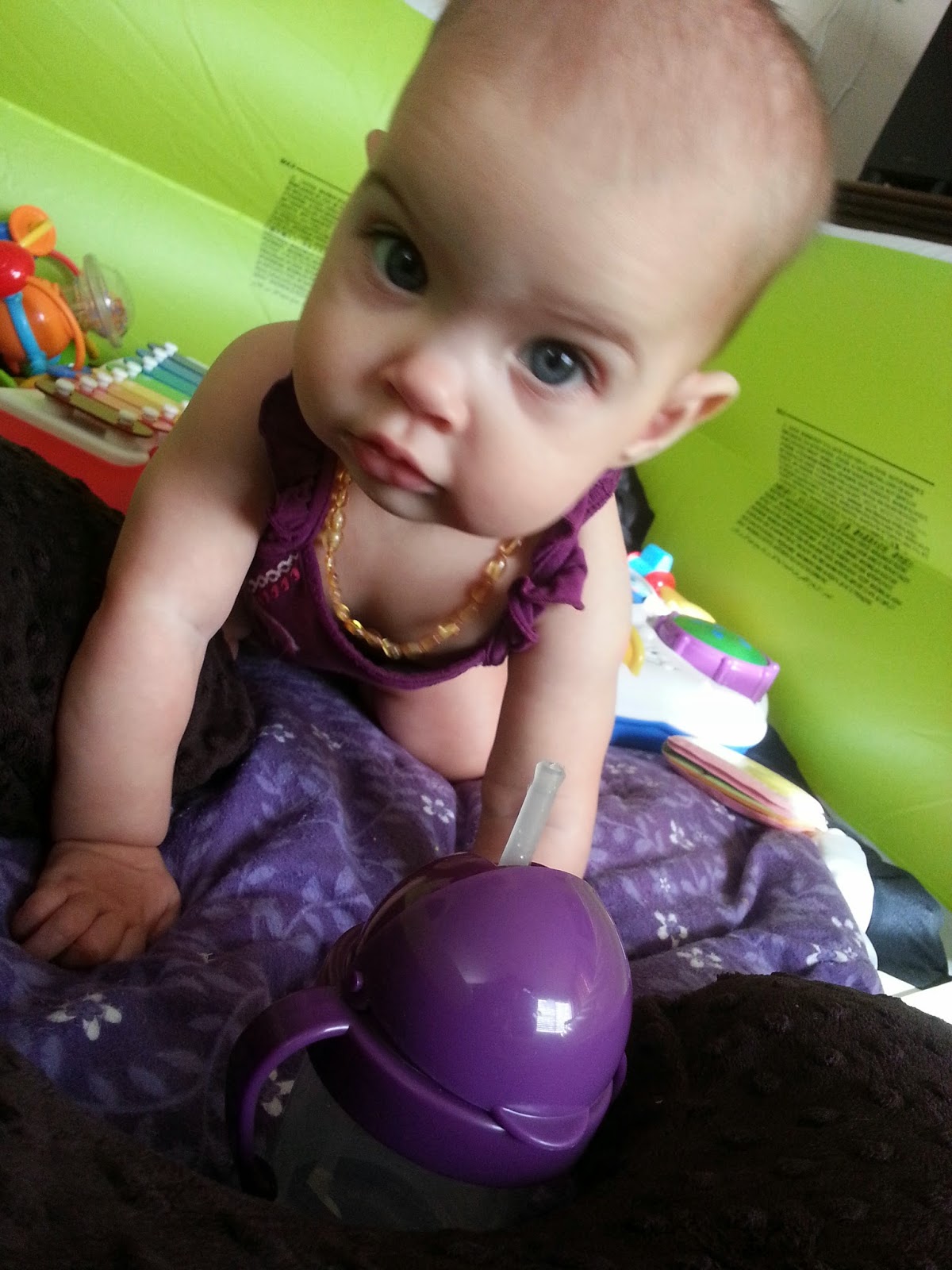 EATING
Let the adventurous eating begin! After perfecting her consumption of the first foods, we have moved on to delightful blends and stage 2 foods! We have also FINALLY found a puff that she enjoys... (She is not a fan of banana or sweet potato puffs, she likes the spinach & kale green ones!). She still isn't quite sure about the picking up the puff and putting it in her mouth on her own bit, but she has decided that the texture no longer scares her - and the flavor is nice, too. Some of her favorite Earth's Best stage 2 foods include Pears & Raspberries and Spinach & Rice. (This kid and her spinach! She is like a Popeye in training!). She also has been getting used to her new ZOLI sippee cup. :) 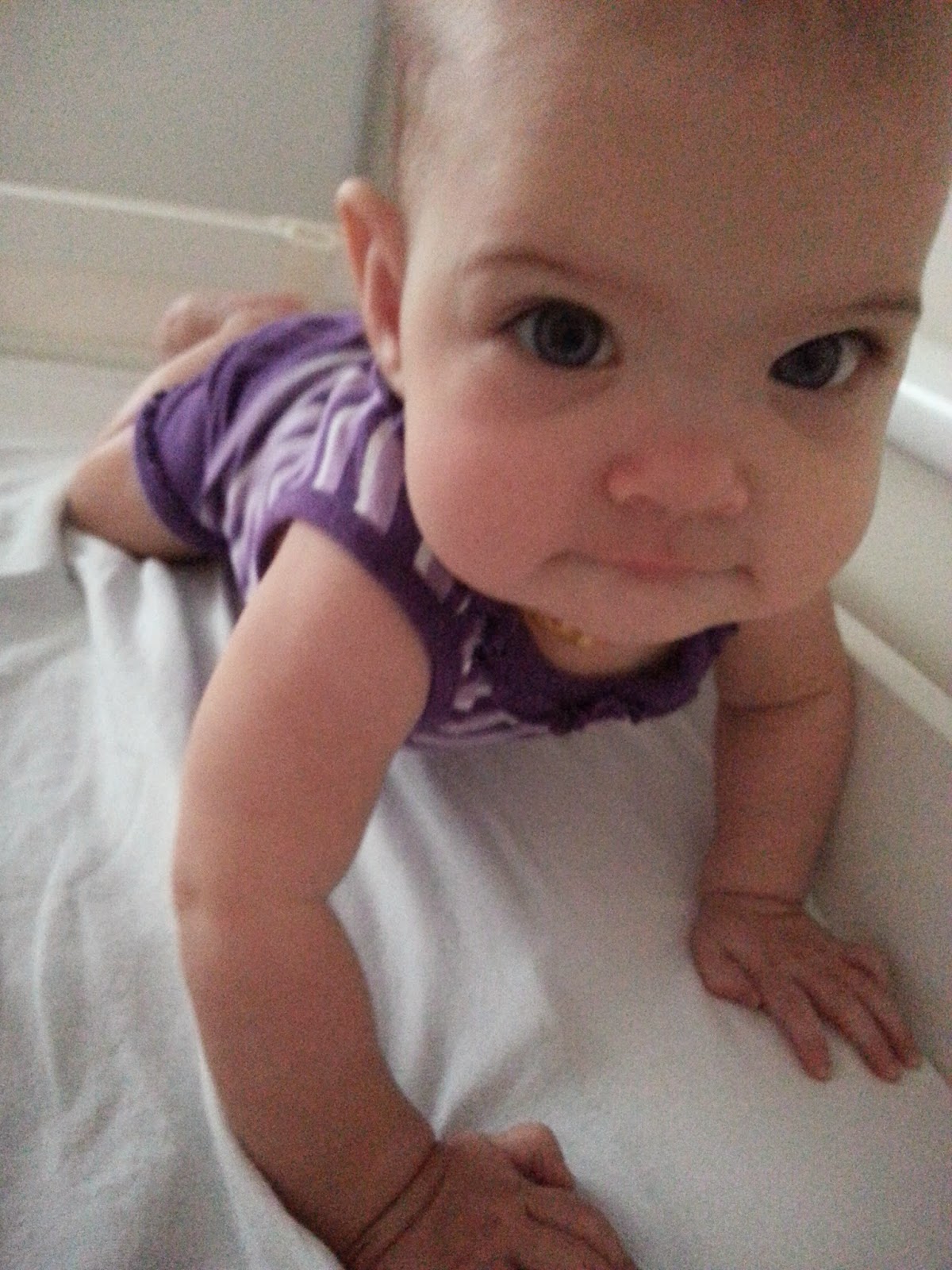 MOBILITY
The week before her 8 month birthday we had a BIG change! Violette figured out how to crawl. At first it was just hand, hand scoot - but the NEXT DAY it progressed to hand, hand, knee, knee! The NEXT DAY AFTER THAT she was a mover and a shaker, and the following day, she was as fast as the dogs! After she mastered the crawl (not even 7 days later) she decided to take on the 'climb'! She climbed the ONE STEP we have in the whole house. At first it was just a lean on the step, but when she figured out that her knees were getting in the way, there she went again! It didn't help that dad decided to drop moms bangle bracelets just out of reach... this kid loves her sparkle! It took about 2 minutes more and then she was up! The next day she tried again, and perfected the climb on the second try.. then once more, there was no stopping her! After a few days of that, she decided she wanted to stand up again... and has become an expert at pulling herself up in her pool pen or against the couch. She stands and scoots just a little bit, she even dances at times! But she hasn't quite decided that she wants to use the railing to get to and fro, she prefers the crawl for now.. (thank goodness!). Definitely in the "pre-walker" stage though. She even climbs on the changing table now (EEK!)

TALKING
Last month, she had said "ah-mamamam" and "dadada" but this month she has changed Jeremy's moniker to "bahbahbah" and has also added her little PAY ATTENTION TO ME noise that sounds like Ahhhhhhhh! She likes to do a little scream fest with dad or I to get us to chat with her... She is also learning volume, and enjoys playing with whispers to loud screams! She likes to chat with her toys, too. Oh, and she smacks her lips at me when she wants to eat and says "momomomomo", It's pretty funny! She enjoys singing at the table, too.


SLEEPING
This isn't the most fun subject for us, as sleep is something that is still hard to come by in this house. Currently Violette enjoys staying up late and waking multiple times a night. However during the day, she naps like clockwork. Not sure what this is about... is there a time in a baby's life when they need to be awake more? should we move the naps up? I just don't think we can hang with late nights and early mornings for very much longer... we are all pretty sleep deprived these days.

THE REST
Violette is very happy to have a new friend that shares her name! We received our package from France that held our very own Mon Amie Violette. She is similar to the My Pal Violet you find stateside, but her name tag is spelled correctly, and elle parles en francaise! We could have her speak in english if we wanted too, but it's nice to have a toy that sings Frere Jacques and Alouette with proper enunciation. :) She also uses Violette's name in a bunch of things, like playing, or telling her that she is hungry and asking if she wants to get some pears (Poires). or talking about visiting the giraffes with Violette. It's really cute, when Vi hears her name in french she stares at her little friend like, YOU KNOW MY NAME!!! ;) 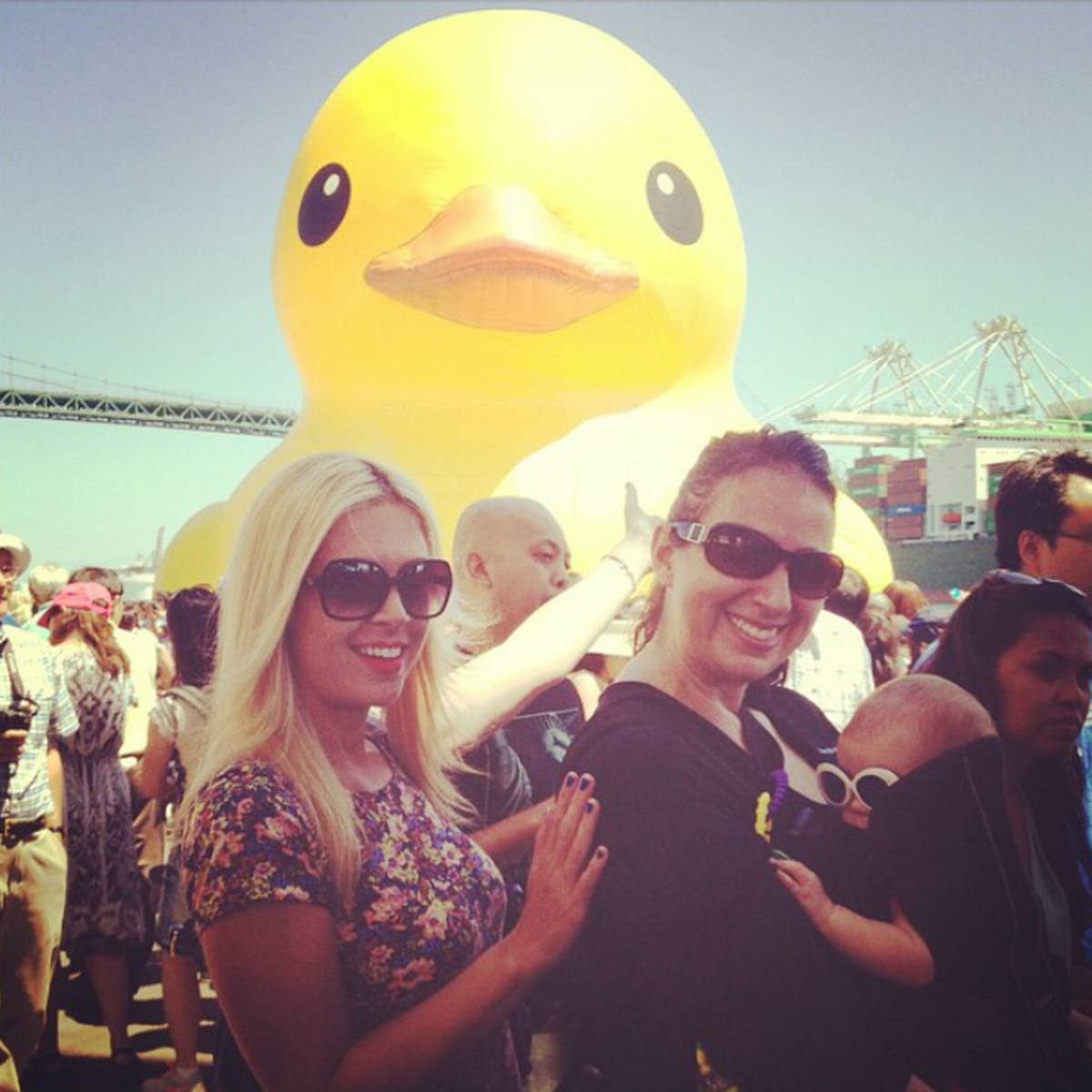 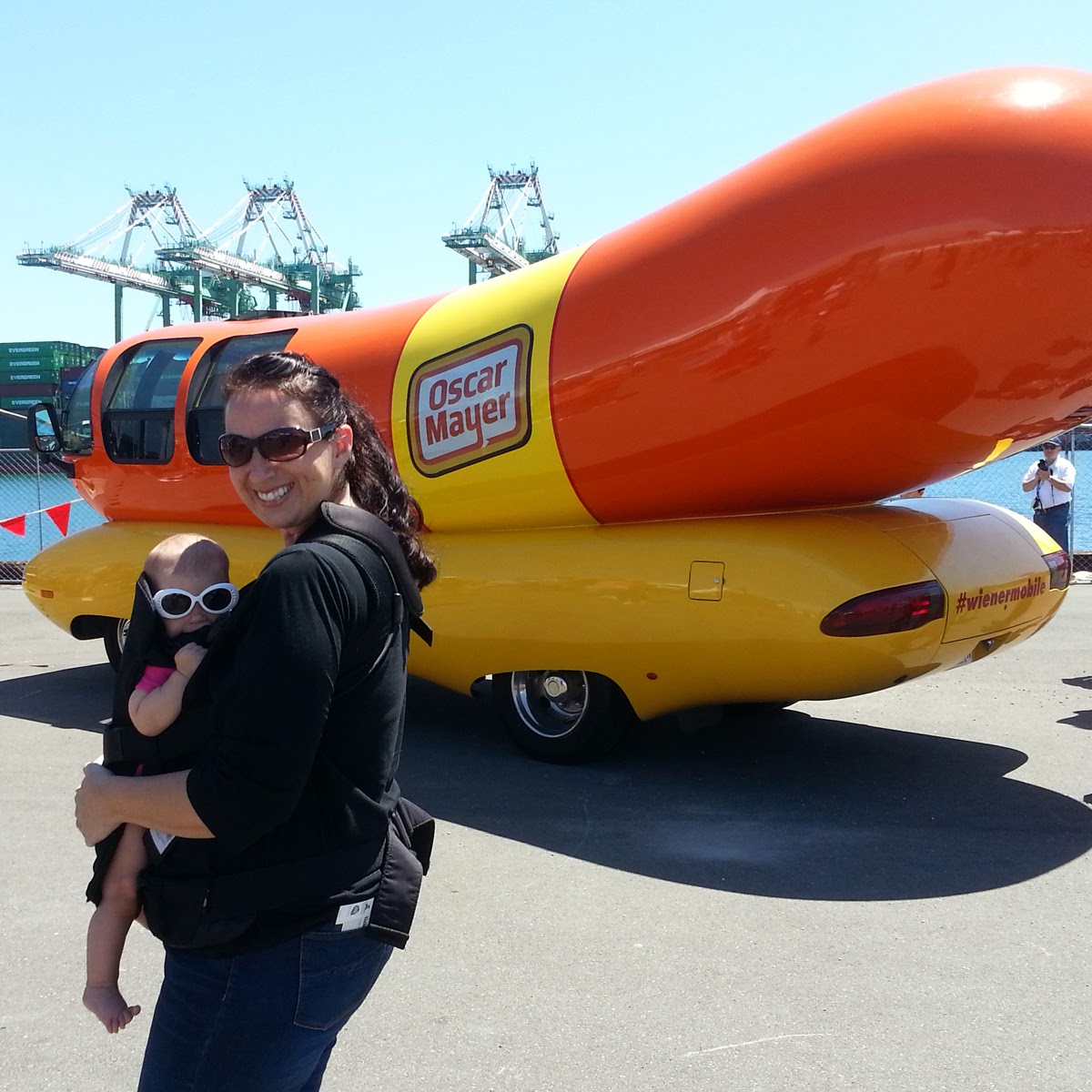 Also, we had a little adventure this month! We went to see the largest rubber ducky on earth! Mama had been eyeing it since it first appeared in the US, and was SO EXCITED that it finally made it to L.A. We went with my friend Pri, who loves all things cute! (she said it was the best day ever because she saw the cutest ducky with the cutest baby!) We were also happy to see the Oscar Meyer Weinermobile while we were there... too funny because Auntie Jenna said we should start seeing all of the oversized things with Violette, and make it a 'thing', and then there it was! :)