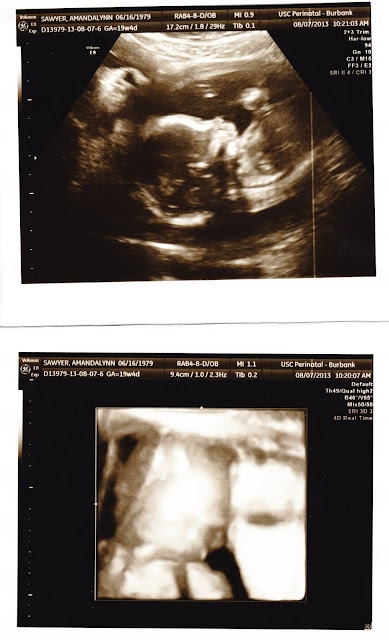 Stretch Marks? No, but I got crazy itchy last week and traded up for the oils everyone so deeply recommends. It seems to have helped.

Sleep? Yesterday I slept until 9am and then I took a 3 hour nap. Exhausted much?

Best Moment this Week: Jeremy & I went for our diagnostic ultrasound on Wednesday. They are set up very cool, huge tv screen on one wall with a couch beside the ultrasound table so Dads can be comfy. They dim the lights and everything - its like watching Baby TV. More on this in the notes to the little one.

Miss Anything? Sushi. What I wouldn't give for a Rock Shrimp Roll from Miya Sushi!

Movement: Here and there, baby seems to go back to their favorite comfy spot all the time. :)

Food Cravings: I craved Tamales last week. That was new for me. And I really wanted a Ham & Cheese BLT with mayo on toasted sourdough. Too bad the doctor told me to steer clear of MAYO! (That and the lunch meat rule made me steer clear... )

What Makes you Queasy: Chicken. And whenever my stomach is empty.

Gender: It's a GIRL!!! Violette Elora Sawyer! I tried to be cute and spread the word via nail polish - I had chosen Violet for Violette and Blue for Maddox, and sent out a text saying "which will it be?!" and some people got that one, but no one got the answer with the Purple nailpolish... LOL. So it was all for naught.

I did make her a logo/emblem though! {C'mon, did you really think I would wait on THAT?} 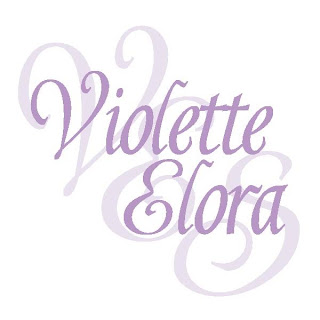 Symptoms: Exhaustion, Fatigue, Pain and last but certainly not least annoying - Morning Sickness. WILL IT EVER END?!!?!?

What's the Daddy-to-be Doing? He is so happy to know he is having a little girl. He actually texted me 10 hours after we found out with "WOOOHOOOOOOOOO!!! It's a GIRL!!!" which made me laugh out loud.

Notes to the Little One: You really don't like to get your picture taken, do you little one? I am sure it's uncomfortable - the movie we watched said that you hear a high pitch sound from the machine. You certainly know where to hide to make the doctors grimace. Dr. Lee was so very patient though. He tried to get you to come out and play for about 15 minutes, and then he told me and Dad to walk down to the bakery and get a pastry and an orange juice and walk back - and that should get you moving. HOUR DELAY! When we got back, tummy full of sugar, you still weren't awake but at least you had moved into a space where he could see you better. FINALLY, he told us that you were a baby girl! :) I said to your dad, "DOVEY! It's a VIOLETTE!" and the doctor said "Now THAT is a cute name!" he he.

And then I saw your chubby cheeks and started to giggle. Just like your Mama :)

He took a few more measurements and told us that you looked very healthy, but since he couldnt get to every part of the test that I would need to come back for a third diagnostic checkup in one month. (MORE BABY TV TIME!!) See Violette, everyone likes to take your picture so you will need to just get over that shyness quick! You have a picture every 3 weeks with Doctor Medrano, and now you get NOT TWO, but THREE fancy 3D appointments! And we just made it to the halfway point!

Uncle Pookie was joking the other day that the ultrasounds were PROOF POSITIVE that you were an alien. He even made a collage of your ultrasounds and pictures from the movie Alien. That is why we are posting the 3D of your face today, so that Uncle Pookie can see that you are much more human than previously thought. Sadly, the scan messed it up so you can't really see the shadowing, but on my copy you can easily see two eyes, a nose and a mouth. The doctor said that your face is still developing so we won't know who you look like until we see you again later on. BUT! At least we know you aren't an alien! :)
Posted by Little One Sawyer at 8:32 AM